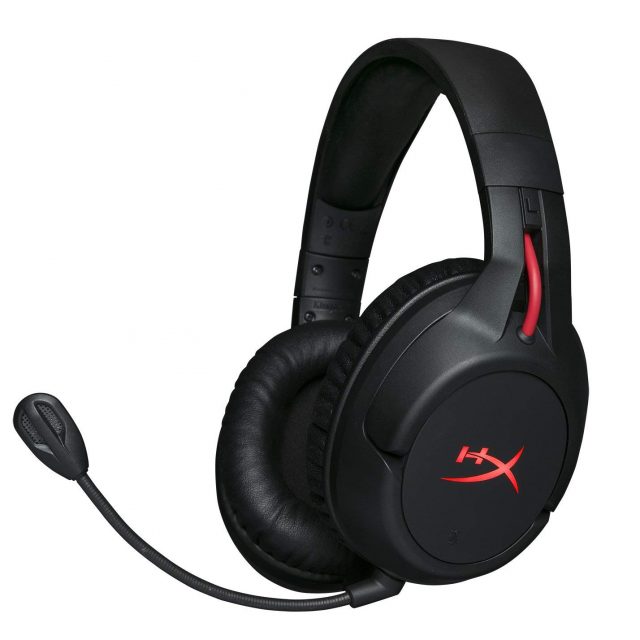 HyperX is new to the wireless headset game, despite this, the HyperX Cloud Flight is something worthy of consideration.

HyperX have been doing wired headsets for a long time, so this wireless version is long overdue. That said, it has a traditional headset design but quite plastic in look and feel and is mostly black.

There is a minimal lighting effect, which can be turned off to save battery life. The matt finish is better than having gloss as this attracts fingerprints.

When first put on, it is very comfortable to wear, even for long gaming sessions. Light weight but still snug with no annoyance or irritation, except for a little heat build up after a while.

The Cloud Flight’s earcups also rotate 90 degrees, which makes it easy to rest around the neck.

There’s a volume wheel on the back of the right ear. This is big enough to easily find and adjust. On the left ear there is a power button, 3.5mm ports for aux input and the microphone, and a MicroUSB charger.

The sound quality is good for a wireless headset. Perhaps not as good as the Cloud Alpha, but not bad in comparison. It also only outputs a 2.0 stereo sound, so you won’t get the same surround-sound awareness of the 7.1 headset. It has a lot of noise insulation. Most of the outside world was muffled when in use.

The battery life is 30 hours, but this is only so when you switch off the LED lights (otherwise you get far less). While you can switch off the lights, you can’t do this permanently.

The headset works with PC, PS4 and PS4 Pro, but not Xbox One, at that console has its own wireless technology.

While the HyperX Cloud Flight is a serviceable headset, you may be tempted to look around at alternative headsets if you want better surround sound capabilities.

The headset can be purchased from Amazon for £190 at the time of writing. (Amazon link).