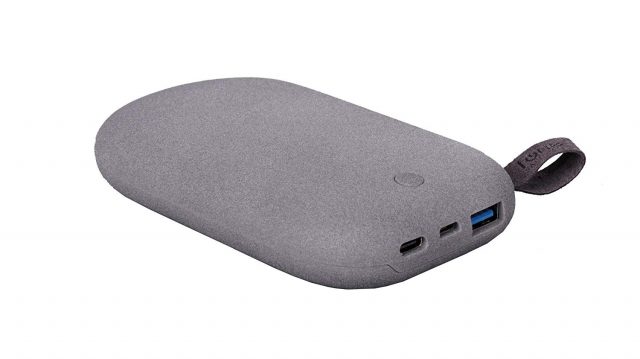 Fonesalesman has launched its latest wireless model, the QiStone2. The QiStone2 offers twice the power of the previous QiStone+ model. With an 8000 mAh capacity it can charge an iPhone XS three times over in just one charge, it claims.

Its armed with a USB Type-C port for faster charging, meaning any Qi-enabled device can be topped up on the go. The unique and timeless stone design embodies the charger’s simplicity, to charge a device you just need to place a compatible phone on top of the QiStone2.

It has a simple stylish design and slim profile. This means that this is unobtrusive on any desk. It’s not quite as thin as some of the other 8000mAh batteries out there today, and that’s because QiStone 2 has two wireless charging zones on it.

Positioning the phone in the right position is easy and the blue confirmation light and single beep to ensure correct alignment is helpful.

It has four lights to indicate battery level and one power on/off key. On top is a status light which will be Red or Green and then you have your I/Os on the bottom it is so simple to use.

The type C port on the left can work as input or output. If you use it as output to your phone it will rapid charge. The same goes for the USB 3.0 port on the far right.

The only thing we didn’t like it the annoyingly loud beep it makes when you place the phone on the charger. Once it is fully charged it seems to then wait until it is down to 99 per cent on the battery and then beeps again to indicate it is charging again. This could be really annoying if it was next your bed.

The charger might be a slight bit more than other powerbanks, but it’s beauty, its Qi wireless charging and its dual-charging abilities make up for the price. It can give you a full recharge for a couple of days away from an outlet, and do so with total ease of use and style.