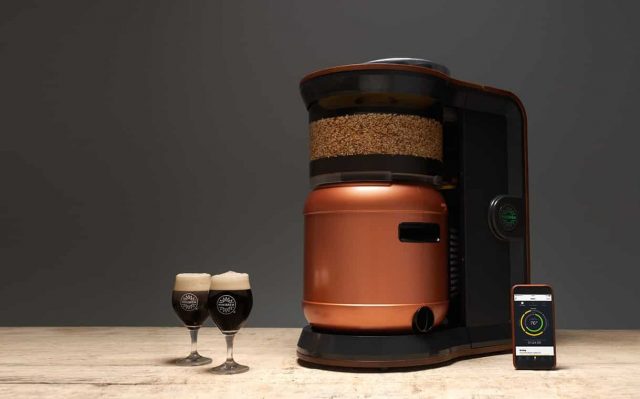 The interesting in craft beer in the UK has exploded over the last ten years with supermarket shelves heaving under the weight of cans and bottles dedicated to real, tasty beer. So it would be great to make your own beer for consumption.

This is where the Minibrew Craft comes in. It is an all-in-one, automatic beer brewing machine created to make home brewing as simple as possible.

If you think you are getting a fancy bucket and a thermometer, think again. Three boxes arrived at our office; one for the main appliance, one for the keg and one for the service packs and brew packs.

Inside, different parts are used for different parts of the brew. The process is controlled by an iOS app that makes things much more simpler to the beginner brewer. There is also a web portal too for those without an iPhone.

It also comes with Brew Packs that have all the ingredients you need to brew beer, such as malt, yeast and any other ingredients for adding flavour. In total, there are around 15 of these to buy and cost up to €29.99.

The app lays out three stages. First is the brewing stage, then fermentation and finally the serving up. Each stage has a number of steps to complete.

The kit needs a water supply, so our thoughts of running this in our labs didn’t work out. This was set up in our tester’s home kitchen, much to the anger of their partner.

The first stage takes place over 12 hours. Not all the time is filled with brewing but you have to come back to it every now and again.

When you have decided on the brew you are going to make, you scan the QR code on the brew pack. This loads up the recipe and begins the process. When you need to do something, the app goes through a step by step guide for the task ahead. Brewing is broken down into four stages; Preparing, Mashing, Boiling and Chilling.

Preparing is where equipment is readied for brewing, such as cleaning the keg and connecting pipes. Cooling comes next. Mashing is where you assemble the tun and add malt, water, and other ingredients.

Boiling comes next where the wort in the keg is then heated to 100 degrees and boiled. After that the chilling begins, water cools the wort. After 30 minutes we then removed the keg from the appliance.

The keg unit needs to be connected and has its own temp control and Wi-Fi built-in. With brewing complete, the appliance can be cleaned and stored away.
Once the wort is cooled, yeast is added to start fermentation. The app will remind you to wash hands and spray cleaning fluid on parts. Not much interaction is need here apart from keeping an eye on the app.

Then comes clarification where the beer is cooled to stop the fermentation process. After that is carbonation. Just before serving, you insert a gas regulator and a carbon dioxide canister.

Lastly, the beer can be served. A tap is attached to the top of the keg and carbon dioxide pressure is reduced to 5psi. The beer lasts up to three months.

In conclusion, the MiniBrew Craft is great for novice brewers to explore the art of beer making. To find out more about MiniBrew, the different beers available and how to purchase a system, visit https://www.minibrew.io/.