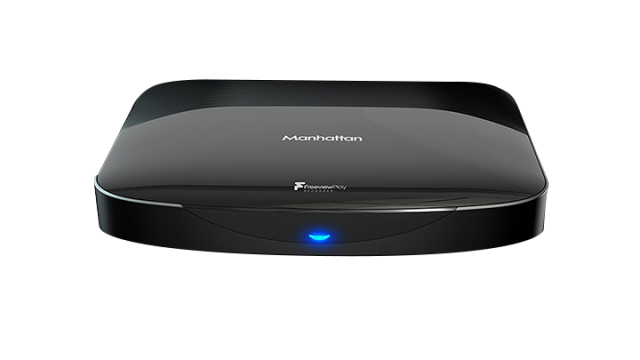 The Manhattan T3-R is a Freeview Play 4K smart recorder that lets you record, pause, and rewind over eighty-five channels of Freeview TV (SD and HD). There is also access to the UK catch-up TV players, including iPlayer, ITV Hub, All 4, and My5.

This British PVR makes finding and saving on-demand programmes a cinch, enabling viewers to look at recommendations, instantly search for their favourite shows and catch up with the last seven days direct from the TV Guide.

Catching up on programmes you have missed is easy – simply use the Electronic Programme Guide (EPG) to ‘scroll’ back on the last seven days TV programmes. With support for the BBC iPlayer, ITV Hub, All 4, and My5, the vast majority of the last seven days’ worth of TV are just a scroll away (requires broadband Internet connection with a minimum speed of 2Mbps).

With its built-in 500GB hard drive, the T3R stores up to 300 hours of TV. Unlike catch-up TV, once you have recorded a programme, there’s no time limit on how long you’ve got to watch it.

Featuring twin tuners, the T3R can pause and rewind live TV. A further benefit is being able to record two programmes at once – ideal for those times when all the good TV is on at the same time.

You can press the button ‘Recordings’ on the remote and it neatly lists the recordings in either ‘All’ or ‘By Series’ – You can see scheduled recordings you have set to record into the future. If you delete a program you have recorded, it even saves it for a while in the ‘Trash’ tab section – Just in case the kids decided to delete the last episode of Grand Designs before you got to watch it! Just fish it out from the rubbish.

When you first plug it in, it searches for all the channels automatically. The channels are then all listed into a guide which has its own button on the remote. All the Freeview HD channels are crisp, record and then play perfectly in superb quality. The ‘Home’ menu also includes apps such as YouTube and YouTube Kids. The unit is very responsive and does not lag at all when flipping around in the menu, which I believe is a common complaint for PVRs.

The Manhattan has been well thought out. One feature which we like is if you have missed the start of a program and it is available on catch up (it will prompt you in the top right). Press the green button to load the catch-up service, straight to the start of the program with minimum fuss. i.e., you want to watch BBC news at 10 but turned over at 10.10 pm you can watch it from the start.

Overall, audiovisual quality is first-rate, having the capacity to stream in 4K from YouTube is appreciated, and the Freeview Play interface is great.