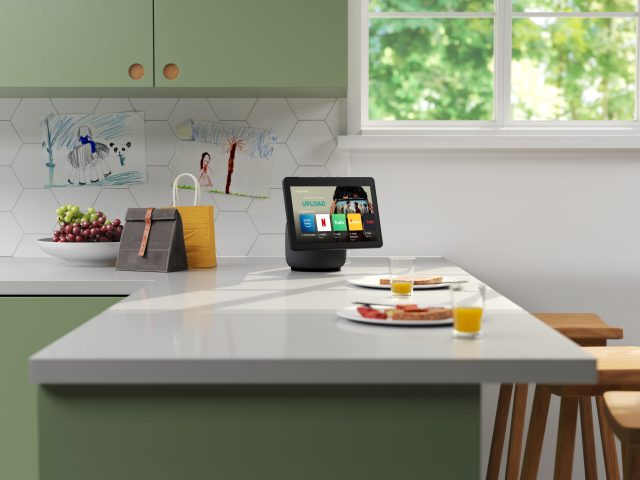 With the Echo Show 8 and Echo Show 5, Amazon made its Alexa screen smaller and more compact. The smart display will grow in 2021 – and will automatically pivot back and forth! What does that and what else does the Echo Show 10 (third generation) do?

The centerpiece is the 10.1-inch screen. That corresponds to a diagonal of twenty-six centimeters. It is framed by a black border that measures 2.5 centimeters at the top. That does not look slim and elegant. The resolution is like the Echo Show 8 with 1280×800 pixels. The display still looks quite sharp but reflects strongly. It shines in bright colors and adaptively, so it adjusts its brightness to the prevailing light conditions. The device responded to touch inputs without noticeable delays but tapping the edges slightly causes it to wobble slightly. It is also easy to read when viewed from the side. But this is not so important because the screen can now automatically follow the user.

The display is mounted almost floating on a loudspeaker. With a diameter of 15 centimeters and a height of 13 centimeters, the cylinder has the dimensions of an Echo Studio capped by half. The Echo Show 10 also inherited the automatic sound adjustment from him, which, depending on the location of the device and the listener, increases or decreases the bass, for example. That worked quite well in the test, even if the sound experience cannot keep up with that of the Echo Studio. No wonder, there are fewer (three instead of five) and significantly smaller speakers in the “can”: there is space for two front-facing tweeters (2.5 centimeters) and a 7.6-centimeter woofer, and there is no mid-range speaker. In terms of sound, the Echo Show 10 is based more on the current ball echo but sounds a bit more balanced and less troublesome at a higher volume.

Amazon Music, Spotify, Deezer, the web radio TuneIn and the audiobook portal Audible can be accessed by voice thanks to Alexa. Services such as Apple Music.

that was also possible on the smaller Echo Show 5 and 8, but it is only fun on the large display. Series and feature films come from Amazon Prime Video or Netflix, and the daily news and YouTube videos (only via browser) come across well. A new video start page shows recommendations for all services. Appointments, weather reports, and photos can be displayed during broadcast breaks. The layout can now be adjusted in the settings or on-demand (“Alexa, show me more”) to see more briefly.

Alexa standards such as setting alarms and timers or filling shopping lists work as reliably as with other Echo boxes. The skills can be meaningfully expanded with the help of Alexa skills.

At the top right in the frame is a front camera that has a resolution of 13 megapixels and thus delivers very sharp images. This is also good for good-looking photos (“Alexa, take a selfie”), but is primarily intended for video chats. This works with Alexa, provided that the called party also has an Echo Show or the Alexa app on the mobile phone. Then group calls with up to seven chat partners are also possible. Skype works too, but only for two.

Users can also conveniently control the smart home by voice. A Zigbee bridge is also on board, with which Philips Hue lamps, for example, operate without their own hub. Anyone who has children or pets will be happy about the clever home surveillance. Via the Alexa app on your mobile phone, you can access the Echo Show 10’s camera while you are out and investigate the living room, for example. From a distance, the display can even be swiveled with a swiping gesture to look around the room. A note and a green light strip on the Echo Show draw attention to the fact that the Echo Show is currently working as a surveillance camera.

The highlight of the Echo Show 10 is without a doubt the automatically swiveling display. A brushless motor and a turntable move the screen and speaker a maximum of 175 degrees to the left and right. How far he should turn freely, he determines in a “test drive”. This prevents the device from catching a wall in the back. The user can readjust the slider and set a rest position. Circular journeys completely around your own axis are not possible. The motor cannot be heard in action, almost noiseless so that panning during video chat or watching a series is not a problem. Tilting up and down is also possible but must be done by hand.

But when does the Echo Show 10 take off? For example, if several participants are sitting in front of the Echo Show 10 during a video chat, the display wants to align itself so that everyone has a pleasant view. A zoom function helps with this, with which the camera should capture everyone and at the same time focus on the speaking chat partner. The built-in microphones also listen for speech and noises so that the display knows where to go. The smart panning did not work perfectly in the test, but it did work surprisingly well. The rotation did not seem hectic and can easily keep up with a single user if he moves leisurely. If, on the other hand, there are two or even more people in the room, the Echo Show 10 does not always manage to commit itself and reliably follow the hustle and bustle. Annoying: With subtle lighting in the evening, the movement function is completely on strike. Commands such as “Alexa, turn to the right” are then rejected by the display with the message “Lighting too weak”.

The constant “tracking” at every turn left the testers with a queasy feeling. Here it helps to limit movements to selected activities, such as making calls, watching videos, or displaying recipes. For even more control, you can control the function via Alexa. Suitable voice commands are “Alexa, follow me / stop following me”, “Alexa, turn left / right” or “Alexa, turn movement off / on”.

The Echo Show 10 is now available in black and white and can be had for 250 euros. Those who can do without the large, swiveling display can choose the “self-contained” Echo Show 8. It does not even cost half the price, is more compact, and, thanks to Alexa, no less smart.

The Echo Show 10 looks like a floating tablet stuck to a speaker. The turntable and camera allow smart panning and zooming. “Tracking” works quietly and reliably, even if the display can only cope with daylight and prefers leisurely movements. On top of that, the Alexa device must constantly watch and listen – certainly not for everyone. If you have no problem with it, enjoy videos and music, and have enough space for the movable display on the desk or in the kitchen, then the new Amazon display is the right choice.