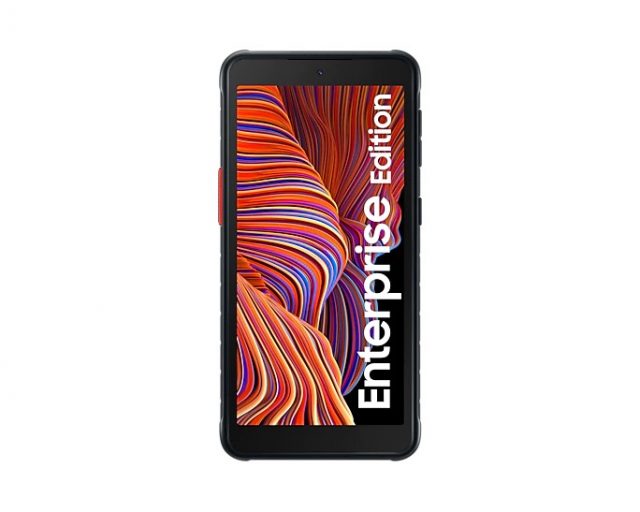 Nowadays, in tougher working environments, you no longer want to make concessions in terms of mobility. With a device such as the Samsung Galaxy XCover 5, that is not necessary either, is the promise from Samsung. We figured it out.

Samsung has had ruggedized devices in its portfolio for years. For example, the Korean company released so-called ‘Active’ variants of its Galaxy S models between 2013 and 2017 (from the Galaxy S4 to the Galaxy S8). The company stopped there quite abruptly, only to produce the Galaxy XCover Pro a few years later. Although it is not based on a model of the Galaxy S line, with a suggested retail price of around £329 at the launch last year, it certainly cannot be called cheap.

The XCover Pro can be seen as the ‘high-end’ choice for those looking for a ruggedized Samsung phone. This puts them in the same segment as the higher-scaled models from Cat, for example. Above that are of course devices such as the Zebra EC50/EC55, which have a clearly different and more specialized target group.

If you are looking for an advanced device with the latest gadgets and best performance, the Samsung Galaxy XCover 5 is not the place to be. If you want that, then you do not belong to the target group of this device. This is a modest device in all respects. For example, we see an LCD with a diagonal of 5.3 inches and a resolution of 1480 × 720 pixels. Such a small diagonal means that this device is very handy. It also weighs only about 170 grams. That makes this a very pleasant device to hold and operate. Important when you consider that it is a ‘tool’ with which you must work.

If we look further at what the Galaxy XCover 5 has to offer, we see quite an interesting SoC. That is namely the Exynos 850 developed by Samsung itself, an SoC with 8 Cortex-A55 cores, and a Mali-G52 MP1 GPU. The interesting thing is that this SoC is produced using an 8nm process. This makes it one of the first SoCs in that category to be available for the lower end of the market. A smaller production process means higher performance per watt. This also means that such SoCs should be more economical than ones that use a larger production process. This also partly explains the small battery with a capacity of 3000 mAh. This seems a bit lacking in a business device, in which battery life is even more important than in a consumer device. This battery is interchangeable. This is standard for devices that are used as tools. The XCover 4 also contained an even smaller battery, 2800 mAh.

Other specifications, buttons, and connections

Given the target group that Samsung wants to serve with the Galaxy XCover 5, people who work in demanding environments, it is not surprising that the device has been given an IP68 rating. The MIL-STD810 specification is also present. If we look at the connections and buttons on the device, we see that Samsung has chosen to no longer place physical navigation buttons for Android under the screen. That was still the case with the XCover 4 and 4s. The other buttons have (of course) remained. In addition to the on/off button and the volume buttons, we see here again a programmable button. You can link this to a specific app. Think of the Walkie Talkie in Microsoft Teams, which enables Push-to-Talk communication.

The Galaxy XCover 5 also has 4GB of RAM and 64GB of internal storage. The storage can also be expanded with a microSD card. The cameras aren’t special on paper, with a 16MP variant on the back and one with a 5MP resolution on the front. You can charge via the type-c port on the bottom of the device at a maximum of 15W. If you use a suitable dock, you can also charge via the Pogo Pins, the contact points at the bottom.

One last interesting feature that we would like to mention here is the presence of facial recognition on the Galaxy XCover 5. This is the only biometric security option on this device. A fingerprint reader is not present.

An important feature of the Samsung Galaxy XCover 5 for the business market is the Enterprise Edition label that Samsung has stuck on it. According to the Samsung site, this guarantees you ‘up to 5 years of free security updates and a product lifecycle of 2 years. What the ‘until’ means in this regard, of course, remains to be seen and we would certainly check with Samsung if you were considering going for the XCover 5.

In addition to long support, the Enterprise Edition label allows you to use Knox Suite for free for a year. Knox Suite is a bundle of four Knox solutions: Knox Manage, Knox Platform for Enterprise, Knox Mobile Enrollment, and Knox E-FOTA. These are the most important Knox solutions, which you can more easily take together in this way, is the idea.

As we have already indicated, with the Samsung Galaxy XCover 5 you should always keep in mind that this is not a device for everyday consumer use. It should therefore not be judged that way. That said, however, we would like to give a brief impression of how the device performs in general, whether that has an impact on the final verdict.

The Samsung Galaxy XCover 5 feels nice in the hand, fits easily in even relatively small pockets, and can be operated well with one hand. Despite the small battery, the battery life is quite good. The device easily lasted a working day on a single battery charge.

In terms of software, we are a little less positive. If you go through the menus of the Galaxy XCover 5 or switch between apps, it sometimes falters. This device runs on Android 11, with the now relatively light Samsung skin over it. Things are still not optimally aligned. It is not the first time that we have had such an experience with a Samsung device from the lower segments. The response of the screen to the fingers is also not always fast and accurate. In combination with the faltering software, this makes navigating on the XCover 5 not always a pleasure.

We were also not always incredibly pleased with facial recognition. It regularly refused service. This while it had nothing to do with the environment in which we used it. Two seconds later it did it in the same conditions every time. This also is something that still needs some fine-tuning on the part of Samsung.

Finally, the main camera has been better than expected. Of course, it doesn’t come close to the big boys, but at least during the day, it produces perfectly usable photos. Especially if you keep the business approach in mind.

The Samsung Galaxy XCover 5 is objectively not a particularly good smartphone. In practice, it just doesn’t perform well enough for that, if you judge it as a regular smartphone. However, that doesn’t mean it’s a bad smartphone for the environments it’s intended for. Because it does indeed link some interesting aspects for business use.