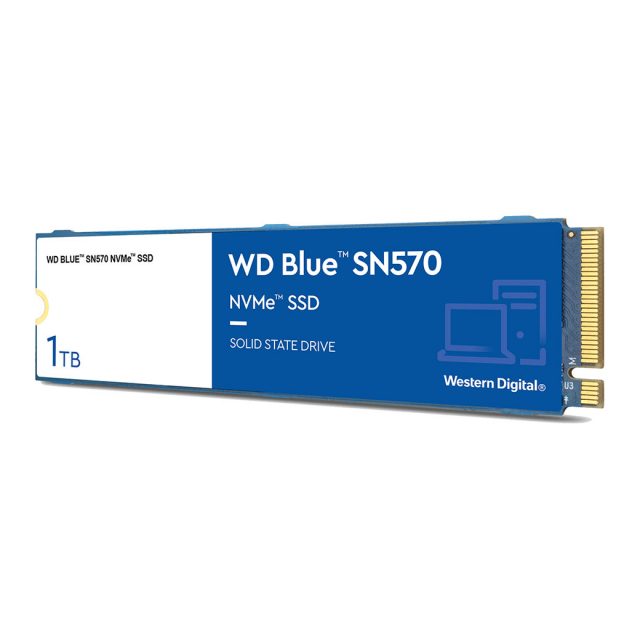 Western Digital has focused recently on fast storage solutions such as SSDs. There is no doubt that after WD acquired SanDisk, it became a significant player not only in the world of traditional hard storage but also that of NAND with a variety of SSDs and WD’s well-known branding also got there in the names of colours that symbolize the various market shares.

According to the Western Digital product page, these SSDs are primarily aimed at content creators and other creative professionals who need an inexpensive storage solution for their media files. With its PCIe 3.0 interface, a sequential transfer rate of up to 3500 megabytes per second for reading and up to 3000 megabytes per second for writing, the WD Blue SN570 SSD is not one of the fastest SSDs on the market.

Underneath the SN550 there is a drive called the SN530 as it contains a simple performance layer. Now, WD is launching a big brother to the blue family, the SN570.

Here are some technical facts. The SN570 like its brother is an M.2 configuration SSD with a standard size of 2280 (meaning a width of 22 millimetres and a length of 80). This drive uses the NVMe 1.4 storage protocol through PCI-Express 3.0 X4. There are currently three volumes of this model – 250GB, 500GB and 1TB.

This drive uses NAND storage based on TLC (Tri-Level Cell) technology. This technology is best known for its combination of durability and speed, unlike SLC (Single Level Cell) which is known for speed but not for read cycle resistance.

The 1TB SN570 drive is rated for 600TB of write cycles according to the official WD durability statement. Alternatively, its runtime rating stands at 1.5 million hours of operation. This is a rating slightly above average, but no exception. WD backs up this drive with a five-year warranty. Also, the warranty length is average and common, but quite respectable.

Note the efficiency and quantity of components on the printed circuit board of this drive. It contains only three main components with one being the main storage controller. Next to it is the power supply system for the drive. On the other side is a 1TB NAND chip

This chip that WD uses for its drives is a NAND controller without DRAM memory of any kind. Therefore, we do not find DDR or LPDDR chips here as we are used to finding advanced SSDs. WD is betting here on the performance of this controller in a market share where drives are sometimes found that contain DDR chips for caching needs of the NAND controller. Admittedly, a good controller contains a respectable amount of cache memory in the chip itself and can provide reasonable performance in any situation. This will be discussed later.

On the right, you can see a PMIC (Power Management Integrated Circuit) stabilizer next to a variety of capacitors. This system ensures that the drive controller and its NAND chip receive as regular and noise-free voltage as possible.

The WD Blue SN570 is a drive that is set for a maximum power consumption of 3.5W and typical consumption of only ninety milliwatts. We do not get a clear division here between its three components, but we are not surprised if at least half of it is going to visit.

The WD Blue SN570 drive is a respectable addition to the company’s product line. In our performance tests, it has stood up respectably to significantly more expensive drives. Given that this is a DRAM-free drive, its performance even surprised us. We expected to see it drop in some performance tests.

Another positive part is that in a drive with relaxed maximum performance and the use of a single NAND chip for storage, there is no deceleration due to overheating of the memory controller. We did not notice the deceleration of the drive even after 30 consecutive minutes with no active cooling at all in stress tests and no ability to capture a moment of rest. The NAND controller reported a maximum temperature of 72 degrees Celsius in an effort with an ambient temperature of 23 degrees and no airflow in the area at all. A right point here for the SN570 compared to other drives.

The SN570 series has just hit the market and seems to be a successful product. We would love to see it also come in 2TB capacity to suit users who want to use increased volume.