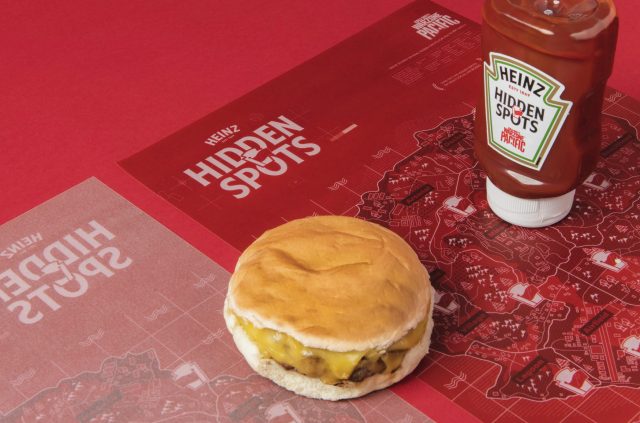 Hungry in the middle of the Warzone? Heinz has a solution. Gamers know that eating while playing games is one big hurdle, even more so on a map that has just been released.

Gamers spend roughly eight hours and 27 minutes each week playing games – so when it comes to Call of Duty, one of the world’s biggest video game franchises, it’s nearly impossible to take a snack break during gameplay.

To help gamers find more magic in mealtime while playing their favorite video game, Heinz, the World’s #1 Ketchup brand, teamed up with Call of Duty: Warzone Pacific to identify hidden spots in its latest map Caldera to safely enjoy a well-deserved break and eat a delicious burger with Heinz in real life.

“80% of gamers eat and drink while playing, but it’s much harder to do this in multiplayer online games like Call of Duty, where an ill-timed break can cost you the match,” says Isabella Rizzo, VP of Marketing at Kraft Heinz.

“Heinz brings the magic to mealtime, whether you’re sitting around the dinner table or enjoying a quick bite mid-game, and now we’re helping Call of Duty gamers safely recharge with a burger break in one of the new points of interest on Caldera. Here at Heinz, we say just eat. No Defeat.”

Top streamers from the UK, US and other brand markets across the globe have joined forces with Call of Duty to map out safe, quiet spots in the new Warzone Pacific Caldera game to ensure that players can take a break to eat a burger and fries without the fear of getting sent to the Gulag.

“The launch of Caldera is a unique opportunity for Call of Duty and Heinz to bring our audiences together in new and exciting ways,” said Tyler Bahl, Vice President and Head of Marketing, Call of Duty.

“As the community explores and discovers the new map, Heinz is giving them a chance to experience the new Warzone offering in a fun and engaging way.”

With Hidden Spots, Heinz is making its debut with an ever-growing audience of gamers. But instead of just saying something to them, Heinz and independent creative agency GUT São Paulo partnered with Activision to connect with them directly where they are – inside the game.

Since Activision’s Call of Duty: Warzone Pacific’s Caldera map was launching, it was the perfect moment for Heinz to partner with one of the biggest gaming franchises ever to help hungry gamers find where to stop to eat while they played instead of having to hide.

“Heinz is an iconic brand that is used to doing so many incredible things in advertising, so with its debut in gaming, Hidden Spots is yet another way the brand is doing just that,” says Murilo Melo, Executive Creative Director at GUT São Paulo.

“Gamers usually say that campers are cowards for hiding to ambush other players, but with the world’s favorite ketchup brand partnering with the world’s favorite gaming franchise, Heinz is here to help gamers eat in peace as they fight in the warzone. We’re excited for hungry gamers to find these Hidden Spots and hope they’re now able to pass the Heinz without the risk of passing away in the game.”

With this initiative, Heinz hopes to get closer to the vast gaming community by giving a little help to them around the world and offering a solution to a real issue that many in the community face daily.

‘Hidden Spots’ is part of the brand’s masterbrand campaign, “It doesn’t matter the time or place,” which also highlights Heinz flavored ketchups, mayonnaise, and barbecue sauce.