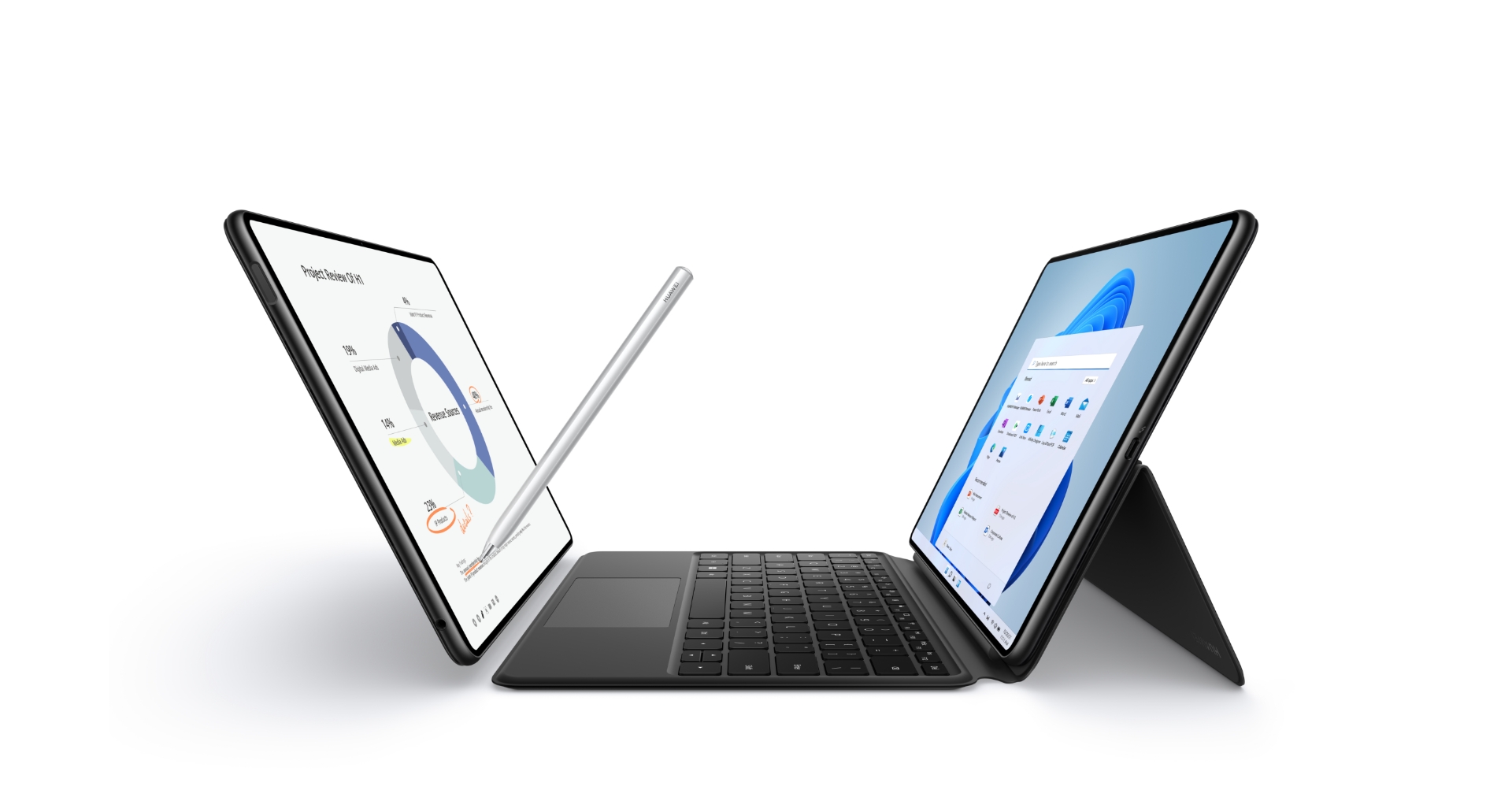 Earlier in the year, Huawei held a major event at MWC 2022 in Barcelona, ​​where we saw several devices in the spotlight. One of these was the Huawei Matebook E – a brand new 2-in-1 laptop with Windows 11. The company wants to demonstrate itself as a premium brand with its own varied network, hence this device.

The tablet comes with a detactable keyboard, and it supports the Huawei M Pencil, which we’ve all tested. The Huawei Matebook E has a 12.6-inch OLED panel in 16:10 format and a resolution of 2560 x 1600 pixels. The screen-to-body ratio is 90% with small bezels, which isn’t ideal when the tablet is hand-held. It is also bulky due to its internals – the weight of 710 grams makes it difficult to hold the device in your hand.

We like the four hundred nits (six hundred nits peak) brightness and vibrant colours on the panel itself, and the fact that it looks good from all angles.

The screen may be 10-point touch, but the OS isn’t quite touch-friendly, so only parts of it work well in tablet mode. There’s also a slight lag between input and the M Pencil’s screen response, which limits usability in some apps.

Huawei never claims to be a graphic designer’s tablet – it’s a device for the work-from-home situation, where you might need to quickly sketch something, like a layout presentation or an image.

Let’s talk about performance. Huawei launched the Matebook E with 11th-generation Intel chipsets – that’s right, the ones that predate the current generation. When asked about it, Huawei revealed that the company wants to bring the device to market immediately, and that the adoption of Intel’s 12th generation will delay this by several months. We might see a refreshed model down the line if the Matebook E gets enough traction.

Our device is equipped with an Intel Core i5-1130G7 processor. The processor has four cores and eight threads with a maximum frequency of 4.00 GHz, but when there is no demand for them, they run at 1.8 GHz. That’s slightly less impressive than the Core i7 variant, with Geekbench 5 giving 1 single-core and 113 multi-core results.

Random read speeds were also very solid, while random write could be better but won’t cause any problems for its intended use.

The 42Wh battery is charged on the PC and you get a 65W charger in the box. Charging from 0 to 100% takes 1.5 hours. Draining the battery streaming Netflix took us a very respectable 8 hours.

The Matebook E really lacks I/O. There’s a single USB-C on the right, while the 3.5mm combo audio jack is on the left and that’s it. Upside down, four speakers sit on the sides in a two-by-two arrangement. There is an 8MP selfie camera for video calling and a 13MP shooter on the back. The latter cannot be used when the magnetic cover is attached unless you fold the top part. The cover is adjustable at an angle from 110 to 160 degrees and simply clicks into place with the magnets on the bottom. The accessory itself weighs 440 grams.

The Huawei Matebook E comes with magnets the M Pencil. Once the pen is plugged in, the user interface will notify you if the pen is pointing the right way for wireless charging.

Double-tap the side to take a screenshot, activate the voice assistant, or do what Windows Ink has to do with a double-tap. Huawei offers a transparent tip and another rubbery tip for a different feel.

However, the hybrid device offers unparalleled flexibility for those who just want to do light office work, browse social media, and watch videos. The OLED screen and lightweight housing are extremely hard to find at these prices if you need a device with Windows. The excellent build quality doesn’t hurt either.